When I was in high school, the other web designers I knew were other teenage girls. When I was 14, I attended a seminar to encourage young women to consider computer science. When I went to university, about a third of my first year CS classes were female.

Any of these women could have become computer scientists. Some of them did. Many of them didn’t. So why did I?

I was in the fifth grade when I made my first web page. It’s a typical nerd origin story: I wanted a truly unique pet page for my Neopet, and to do that, I needed to go beyond the provided templates and edit the HTML directly. I borrowed HTML books from the library, and created a webpage with a blinking black background, haphazardly placed tables, and glowing blue headers to match my electric kau.

It was beautiful. It was an eyesore. I was hooked.

I went on to create many more web pages. In the fifth grade alone, I also created a Neopets fan site, a personal website, and a website for my “writing”1. I even volunteered to do my older brother’s Information Technology project, a Simpsons page complete with a “Who Needs the Kwik-E-Mart?” MIDI playing in the background. 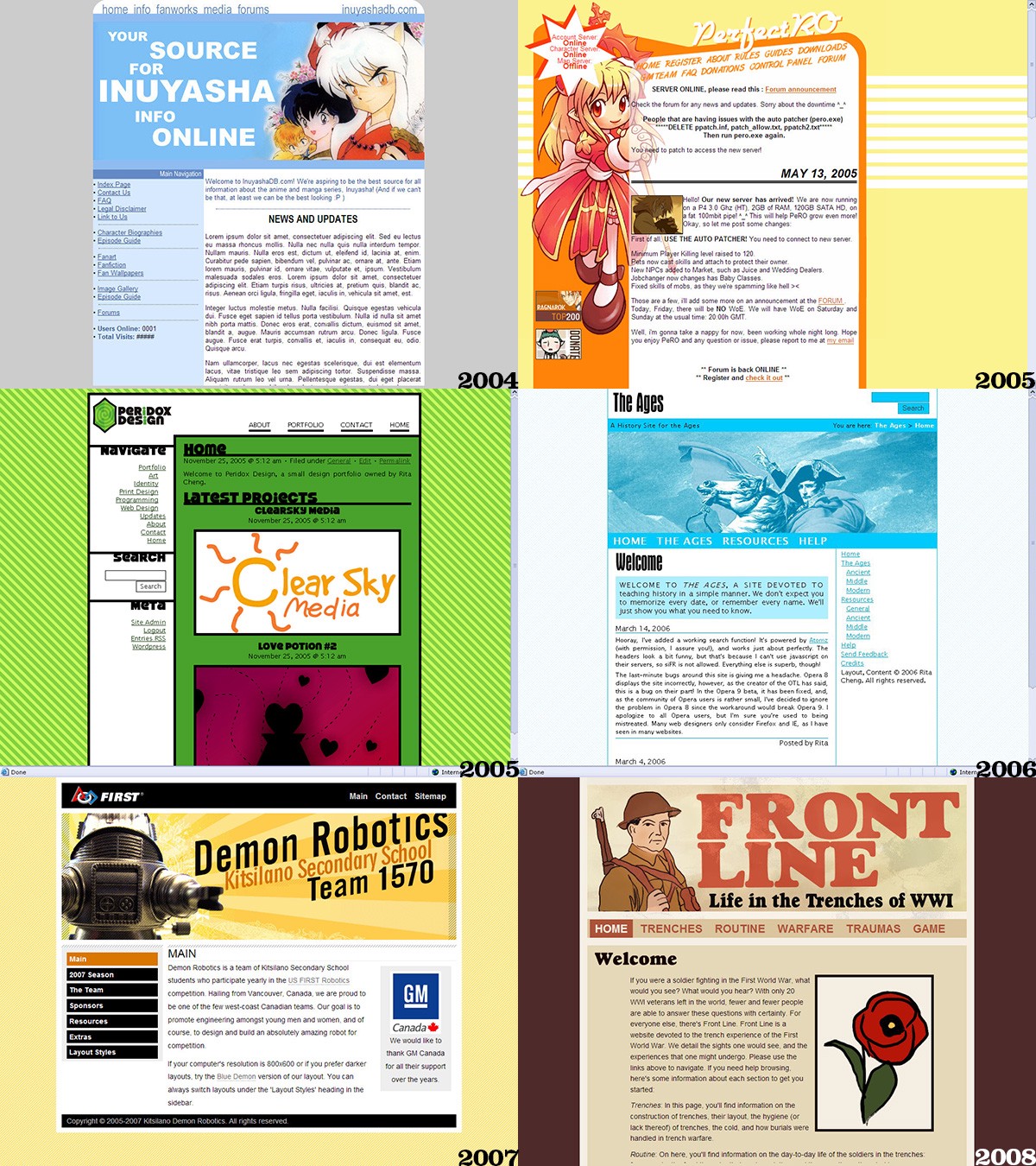 By high school, I was creating so many websites I can scarcely remember them all now. I begged my mother to use her credit card so I can buy my own domain name. I honed my skills in HTML, CSS, and PHP. Most importantly, I discovered communities of like-minded teenage web designers— a few in person, but mostly online.

I can find hardly any trace of these communities left on the modern internet. Trips to the Internet Archive are my primary reassurance that they weren’t a figment of my imagination. The modern equivalent of these communities would be Tumblr: they both connect like-minded, introverted teenagers with blogs, tutorial websites, and maybe a website for screen captures of favourite TV Shows. As part of those communities, we learned HTML, CSS, graphic design skills, and maybe some PHP.2 We linked each other in blog rolls and talked to each other on phpBB/XMB forums. I was a member of the pixel-art-filled Dodo’s Message Board.3 Being a part of DMB helped me learn some new skills, get aid when I needed it, and made me feel a little less alone in the world.

Because I was making these websites, I decided to take the Information Technology class in high school and even asked to be bumped to the next grade’s offering of it. I was isolated as the only girl in a room full of older boys. I coded rudimentary C++, made my web pages, and retreated into my blogs and message boards.

The Imperial Oil Seminar in Computer Science for Young Women

In the ninth grade, my InfoTech teacher suggested that I apply to attend the University of Waterloo’s Seminar in CS for Young Women. I filled in my application, and a few months later, I took a week off school to fly to exotic Waterloo, Ontario. It would be the first and only time I’d be in a computer lab with only other women.4

I learned a few things from this seminar. How to take apart a computer. How to program a rudimentary GUI in Tcl/Tk. What career paths you can choose with a CS degree. At this point, websites were my weird hobby, but in the future I saw in that seminar, it could be a career.

As it turns out, I was one of the few girls referred by their InfoTech teachers— generally, they were referred by their math teachers or their guidance counsellors. It would be the first time the other girls had ever programmed, and some of these young women would go on to earn Computer Science degrees.

I didn’t realize the impact it had on me at the time, but in retrospect, made a huge impression. Three years later, I started a degree in Computer Science at the University of Waterloo.

My first year at Waterloo was lonely. Unlike most freshmen, I both lived off-campus and away from home. The university mishandled my application and, by the time they sorted it out, there wasn’t room in the dormitories for me. Nobody I knew went to Waterloo— if they headed east, it was either to Toronto or Montreal. Furthermore, in my second semester, Dodo’s Message Board shut down. I had never been so isolated in my life.

The problems you face while being in a visibly marginalized group aren’t necessarily different from those of the majority,5 but being marginalized can often make those same problems worse. Feeling lonely is bad for any college student. Being a minority compounds that loneliness. Getting poor grades is terrible. But when you’re the only girl and you’re getting terrible grades? You feel like that’s a sign to cut your losses and leave. Or maybe you feel extra pressure to stay: you’re the sole representative for your gender.

Later on, my Operating Systems professor kicked out every student who failed the first assignment. The idea was to save students from paying the course fees: if you couldn’t understand pointers, you would probably fail the course. It would be best to wait until you did understand pointers. A friend of mine failed this assignment. The removal was intended to be a mercy, but it felt like a rejection: “You’re not smart enough for this. Get out.”

Instead of leaving Computer Science, I left Waterloo and headed back to the West Coast. I went to the University of Victoria where my best friend was going to school. I wasn’t quite so alone anymore. I’ve stayed in the West Coast since, and earned my degree in Computer Science with honours.

I’m eliding a lot of details in this origin story. I’ve retconned6 away employment, alienation and abuses— I’m choosing which stories define me. Here’s what helped along the way:

I’m extremely grateful for all the advantages I’ve had in life. I began as a teenage designer, and end here as a full-stack web developer. Truth be told, I hadn’t looked at this history in years. I suffer Impostor Syndrome and forget my past. It should be clear to me: I belong here, and women who weren’t teenage web designers belong here too. You don’t need to have a typical nerd origin story to be a programmer.